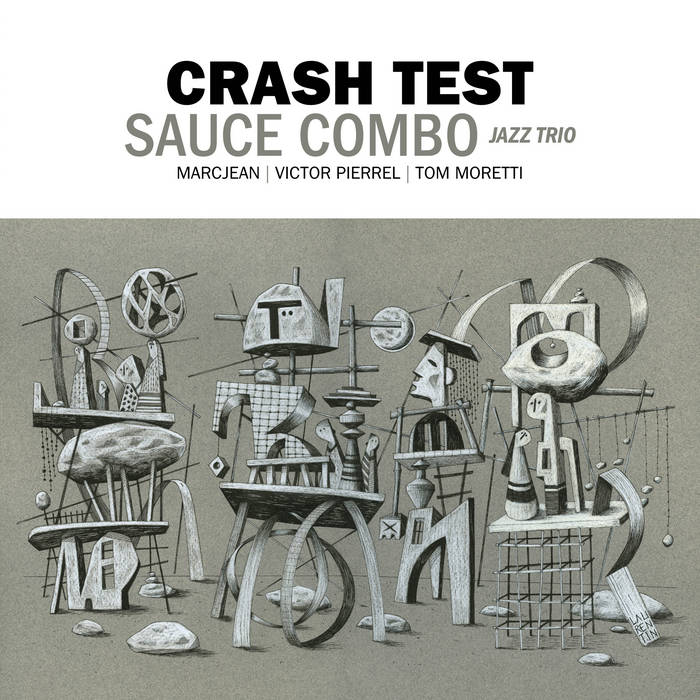 Sauce Combo is a powerful and dynamic jazz trio lead by Marcjean, saxophonist from Bestown (Besançon), sided by the mercenary drummer Tom Moretti and the melodious Victor Pierrel on bass.
The trio's music take place in the modern jazz renewing emerging since few years especially in England and in the USA. France have now a champion.
Inspired by African and latin jazz , West Indies biguine, 70's jazz funk fusion but also 90's drum & bass, broken beat and hip hop, the repertoire is a rich jazz bomb exploding to the ears.
Each second brings its new colorful burst to admire. The band's brillant execution on mainly original compositions makes it a living listening experience. The repertoire is rich and versatile but cohesive and united, ending with an hommage to Stellio. Why?

Crash Test came to light in one day during a single 7 hours recording session at the Honey For Bear laboratories. Sound's engineer Arnaud Bataillard wanted to try several new tubes and audio gears added in his studio's set up. The trio went to test it in a risky all or nothing crash test recording. All the session could have been compromised somewhere and somehow but...

What was before planned as a try, ended into a fantastic album. The mental disposition, while playing when you know that all can be lost in a minute, gave the musicians the proper dimension to express their feelings in total freedom. They were playing for pleasure and without any pressure. Above all without the decisive goal in mind of making a record. It was for all, but it could have been also for nothing. And we are literally touched by this liberty.

The brilliant illustration of Clément Laurentin's "Equilibre Précaire VI" achieves this album, offering a paint showing four figures at the edge of the fall, in a constant imbalance, playing with time and gravity. It's the perfect allegory for the three band's members plus the engineer while making this record. Designed in the tradition of the great jazz covers, it registers the album in the continuity of the bests.

NOT THE NAME
NOT THE FAME
//
AMPLIFIED SOUL
//
EYE EAR MUSIC

Bandcamp Daily  your guide to the world of Bandcamp

Featured sounds by K.Spark and WIZDUMB, plus Basi joins the show to discuss his latest release.